The converting  behaviour of coated papers, like folding and creasing is different than uncoated papers. The paper industry has therefore always been faced with the challenge of producing papers with surfaces capable of meeting higher and higher standards in printing and converting.

Finishing the printed sheets after printing is the final stage in the long production chain leading to a finished product. During folding, the printing carrier (paper/board) is subjected to considerable mechanical stresses.

Coloured areas or images are frequently printed over the fold. During subsequent finishing the coating layer or the fibre structure may split open. This splitting open is particularly obvious in places which have been printed.

Coated papers are more sensitive towards this kind of cracking during folding. The following information and tips show how fold cracking can be avoided, or at least reduced. 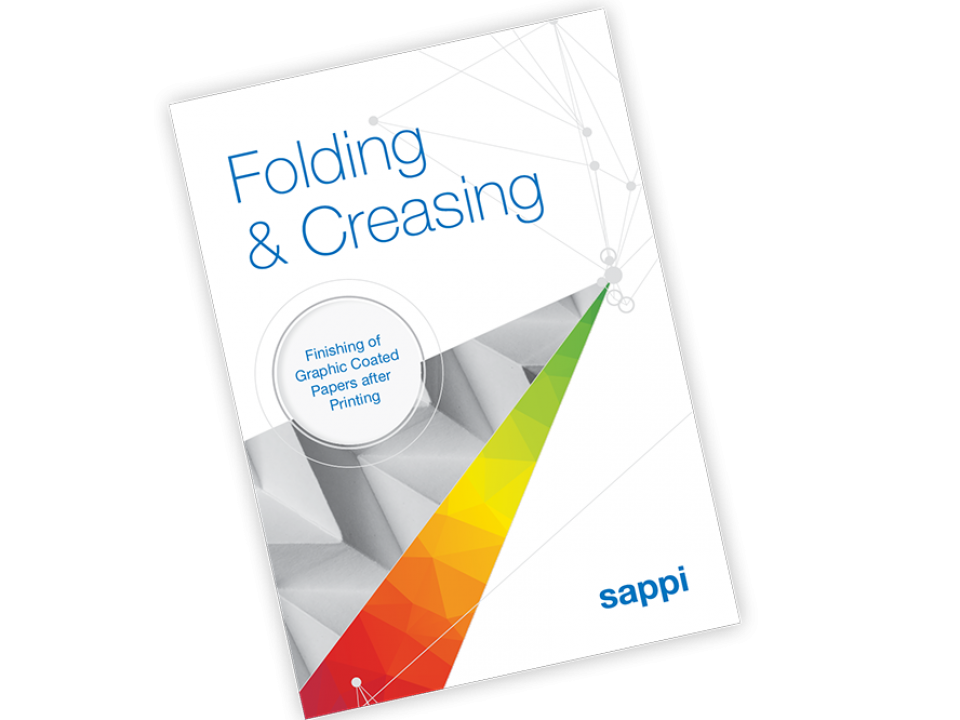 What will I find inside this technical brochure?

This brochure is intended to provide an explanation and help with the folding and creasing of coated papers. In addition, a simple overview of folding techniques is presented.

Get a sneak peak of Chapter 5 below.

What should be considered during paper production?

Coating cracking is influenced by many factors. One important influence is the quality of the fibre composition for the base paper. High-strength fibres and a good bond between the base paper and the coating layers are decisive in preventing fold breaks.

The strength of the individual fibres is determined by the method used to produce the fibre material. During chemical fibre material production using the sulphite or sulphate process, digestion of the fibres must be optimally tuned to the types of wood used. The subsequent bleaching stage should be as gentle as possible in order to preserve the stability of the fibres.

During mechanical production of fibre materials the fibres should suffer as little damage as possible.

The use of mechanically treated fibre materials impairs the folding characteristics in comparison to chemically digested, woodfree pulps.

In the case of impregnation, care should be taken to minimise embrittlement of the paper surface.

With careful selection of short and long fibres, combined with optimal refining of these fibres, the paper maker can influence the fibre binding and thereby the folding characteristics. This is monitored during production by constantly measuring the strength in the laboratory and folding tests in praxis.

What influence does the pressroom have?

Other influences arise during finishing in the pressroom or bookbindery.

The grain of the paper exerts an important influence on the quality of the fold. The final fold should always be made parallel to the grain. This ensures that the larger part of the fibres in the base paper are not over-stretched.

If the fibre texture does burst open, the breakage points are considerably smaller than for a fold at right angles to the grain.

UV inks and UV varnishes are especially liable to cause
increased brittleness of the paper, with considerable coating cracking as a result.

This showed that the climate conditions have an important influence on the quality of the fold. Printed sheets were placed in a climatic cabinet and acclimatised to different relative humidities from 55 % to 25 % at 21 °C. The sheets were then folded parallel and at right angles to the grain.

Result: The folded sheets were evaluated in terms of coating cracking. In this respect, folding quality deteriorated with decreasing relative humidity. The break positions became larger and the coating cracking could be seen more clearly. It may be concluded from these results that constant climate conditions have an influence on fold quality in paper processing.

As a paper manufacturer, we notice that more complaints are made about coating cracking during the winter months.This period of the year is especially prone to very dry climate conditions. For this reason, many printers have installed air humidifiers both in the printing shop and in the bookbindery in order to ensure constant climate conditions.

Setting up the folding machine

Modern folding machines are very fast and quite accurate. A digitally controlled folding machine is set up through an automatic pre-set configuration provided by a folding program. Nonetheless, the exact adjustment of the folding rollers continues to exert an important influence on the fold quality. A sharp-edged fold has a greater tendency towards coating cracking. This is caused by too much pressure being exerted on the paper. The quality of the folding rollers is also important. Elastic rollers reduce the pressing force and improve the result of folding.

Today’s soft PU rollers require the lowest pressing force and consequently produce the best result in terms of coating cracking. With the knife folding principle, the folded sheet is drawn into the folding mechanism by only 2 rollers. As a result, the stress on the folded sheet is somewhat lower than that generated through the buckle folding method with its 3 - 5 rollers. With higher basis weights, the knife folder can achieve a marginally better result than the buckle folder in respect of coating cracking.

How can the pressroom avoid coating cracking?

5 Reasons Why Independent Bookstores Are Thriving

What Does Print Bring to the Modern Marketing Mix?

Why Marketers Should Continue to Invest in Mail?